I’m a 32 year old Travel Agent and have lived in Geelong my whole life. I’m the youngest of 5 children (2 brothers and 2 sisters) and could not live without my legend of a mum! I’m currently living with mum, who has been my absolute rock throughout everything, running around after me with my appointments and treatment.

My 2 main passions in life are Dance and P!nk. I’ve been dancing for more than 20 years now and love everything about it. It’s such a great release and an escape from everything else going on in the world. I’ve performed most styles including jazz, contemporary, hip hop, Latin and commercial and taught all ages from 3 year olds through to 60 year olds. A few years ago I put teaching on hold so I could perform more. I joined a 10 week Burlesque class and loved it so much I decided to enter Burlesque Idol Victoria, under the name ‘Ophelia Flower’ which I won! Since then, I’ve performed in Perth, Sydney, numerous Melbourne venues, including the Burlesque Showboat, and regular shows at Geelong’s very own Piano Bar. 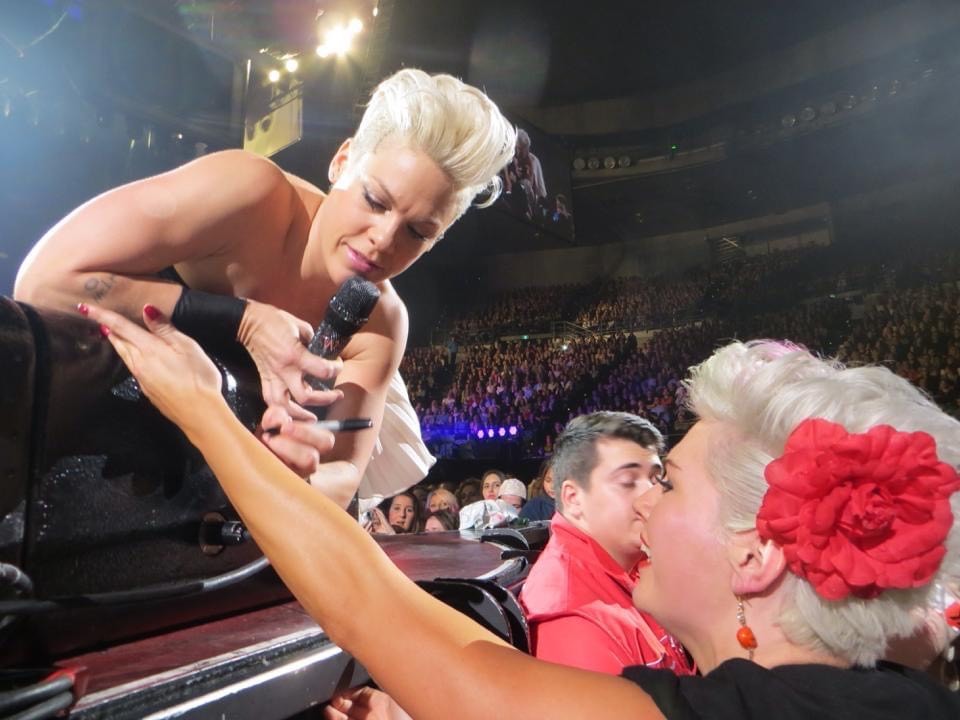 As for P!nk, well where do I start?! To say I’m a fan would be the understatement of the century! I recently ticked off my 40th P!nk concert in November in Austin, Texas, then followed that up by having dinner with her in L.A on the 13th Jan this year. I met her in New York in May of last year where she wrote her song lyrics on my arm and I had them tattooed. In 2013 during her ‘The Truth about Love’ tour, I gave her a gift for her then 2yo daughter and she signed my wrist during the show. I’ve travelled to Canada and the US multiple times to see her perform, as well as Interstate Australia. I’ve made so many incredible friends along the way and actually met my best friend at a P!nk show in Sydney. These are just a few of my standout P!nk moments from throughout the years, but there’s plenty more where they came from.

In March this year I was diagnosed with Acute T-cell Lymphoblastic Lymphoma. I originally began feeling unwell in December with tightness in the chest, but just brushed it off as being a little run down due to the silly season. Over the next week or so the chest pain worsened, I developed a cough and began having trouble breathing with even the smallest amount of exercise. I went to the GP and was given some antibiotics, which didn’t really do much to help. I put it down to being a bit of a chest infection and just figured it would go away on its own. The following week I flew off to the States for my big Dinner with P!nk! I was unwell the entire trip with a cough and shortness of breath but didn’t let it slow me down, I had the time of my life.

After getting home from my trip, I headed back to the GP and was given more antibiotics which still didn’t work. After 3 or 4 Doctors visits and misdiagnosis, I went to a different GP for a second opinion. He sent me for a chest X-ray and after seeing the results sent me straight to Hospital for a CT scan. I was admitted that day and was in there for the following 2 weeks for every test under the sun.

After finally being given my diagnosis, I think the biggest feeling was that of relief. I’d been so unwell for more than 3 months, I was relieved to know what was wrong and that I was in the right hands. I didn’t feel worried, or frightened as all of the Doctors and Nurses reassured me that it was all completely treatable and that I’d be well looked after. 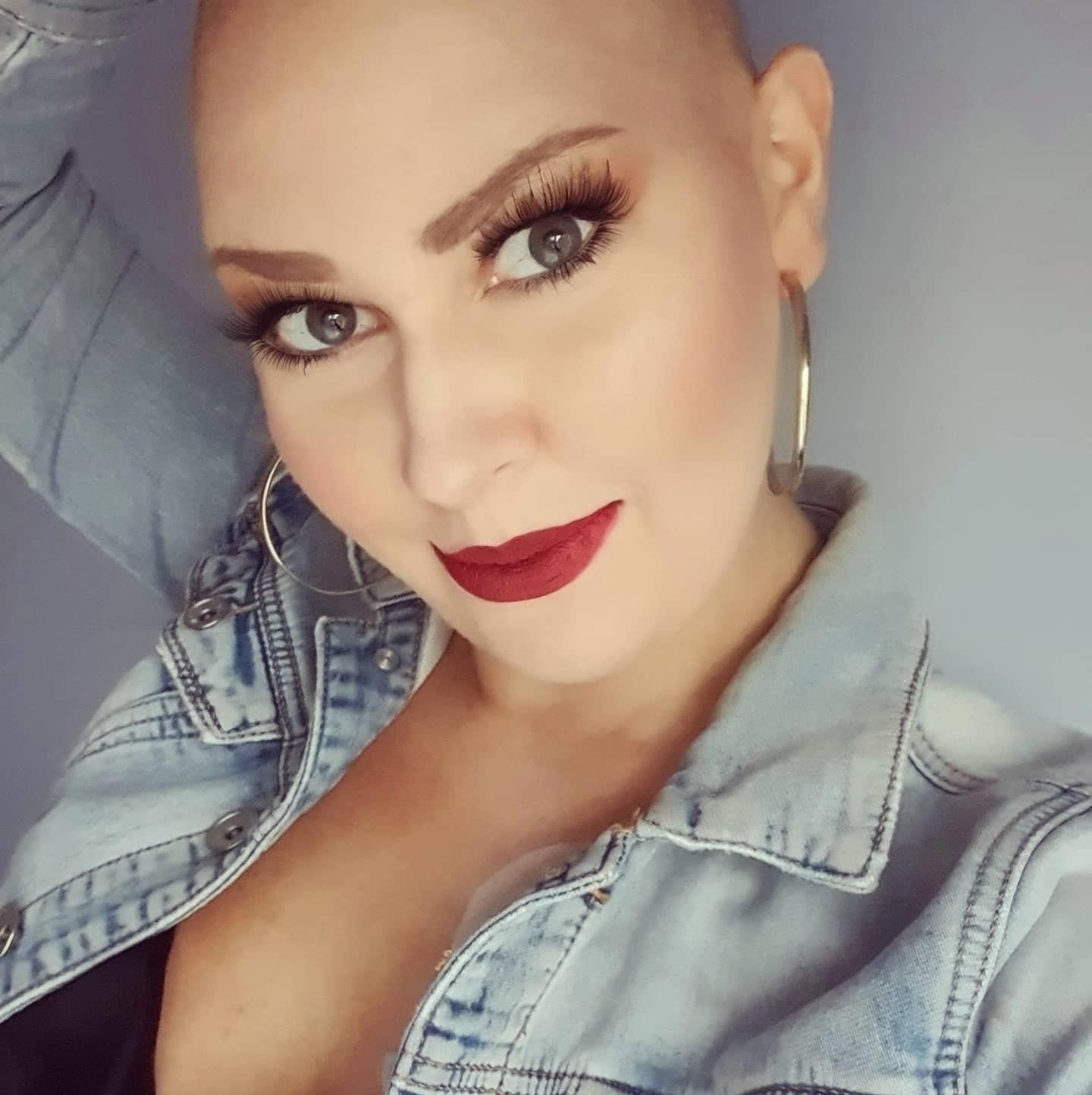 The biggest decision I had to make was around fertility and freezing my eggs for future use. I’ve always wanted to be a mother, so it was an easy decision, although I did have to make the decision quite quickly. I think for other people in my situation, they may find it a little more difficult as there wasn’t much conversation around the subject before having to make the decision.

I was originally admitted back into hospital, to begin my 4 week Induction to chemo, so they could keep an eye on any side effects or reactions. After 2 days I was told I could leave and continue the rest of my treatment through the Dayward, as my body was taking it well.

I had treatment every Monday, Wednesday and Friday for the first 4 weeks, then had a follow up PET scan which had really great results.

All of the nurses and staff at Andrew Love Cancer Centre and University Hospital Geelong have been so welcoming and accommodating, I couldn’t ask for more! They’re always up for a chat and even put up with my endless P!nk stories!

I’m also super lucky to have an amazing support network of friends and family behind me to help me through my journey. I’m feeling really positive about the future and what’s to come and I really believe I can beat this.

I am honoured to be a Barwon Health Foundation Dry July Ambassador this year. I’ve seen first-hand the difference these funds have made over the years from the different support programs in the Wellness Lounge to the amazing brand new Chemotherapy Day Ward at the Andrew Love Cancer Centre.

Please sign up today, take a month off alcohol and help support patients in our region battling cancer just like me. Sign up today at www.dryjuly.com/geelong