There's never a good time to be diagnosed with metastatic cancer, which is incurable, but when that diagnosis comes in your 30's it's especially hard.

Luise Gordon, 38, hasn't had it easy but she believes that the diagnosis has helped heal her. While she has to undergo treatment for the rest of her life, she's determined to make the most of it. By the time a patient is diagnosed as metastatic, they can have seen up to 80 medical professionals, which is why having the constant support of her McGrath Breast Care Nurse, Sam, has helped create a sense of stability in Luise's life.

COVID-19 has thrown additional challenges in to the mix, with border closures preventing Luise from spending time with her family from Queensland for much of the past year, including Christmas.

This part of my story isn't too happy. It was the end of a shitty, abusive relationship and after my bumps and bruises went away I realised I still had another lump under my arm. It's one reason that I missed it even though it was the size of a golf ball and was very tender.

It all started three years ago, and I just knew. My mum had breast cancer five years before me and my grandmother had it as well. We hold theCHEK2 gene, it's not so much a breast cancer gene as just a cancer gene. Mum and Nan both recovered, they went through regular treatment and are fine, so I expected that too. 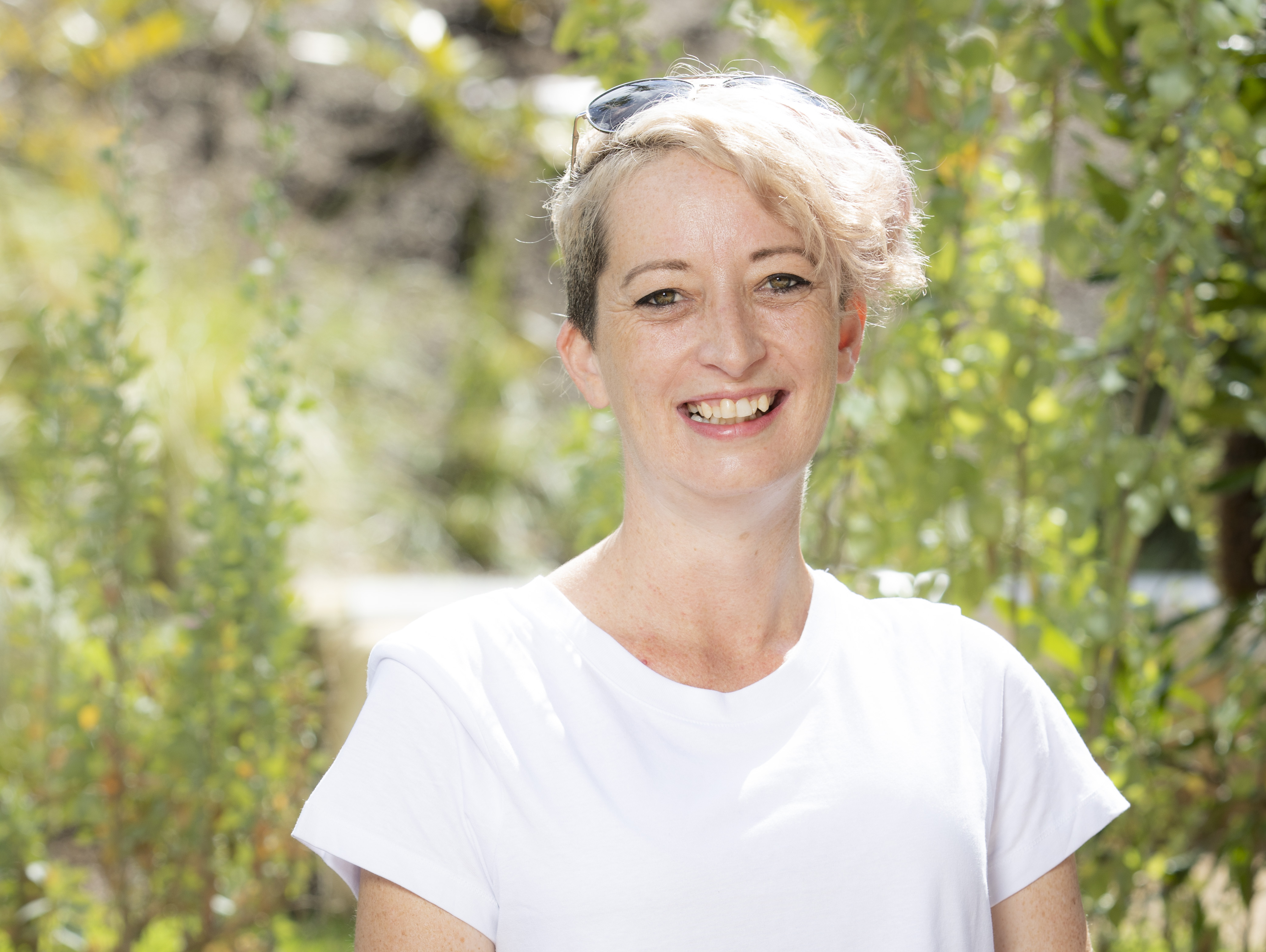 I went through the regular rounds of chemo and when I was getting ready for radiation treatment, I had the scans and they saw something on my bones and kidney. It turned out I had unrelated renal cancer and the spot on the bone was metastatic breast cancer. I was told I've got good bad luck, the mets was in a good spot on my hip so it was easy to radiate because there was nothing major in the way.

I did radiation and then had kidney surgery, which cleared the cancer. The good bad luck is that I probably wouldn't have known about the renal cancer for another 5-10 years, although it was visible on scans it was very, very early.

My treatment changed after the metastatic diagnosis. During stage 3 early breast cancer I was offered perjeta, a breast cancer drug I would have to self-fund - around $16,000 at the time - rather than get on the PBS and I didn't do it. When I got to stage 4 metastatic cancer I went onto chemotherapy with perjeta on the PBS. I don't know what difference it would have made if I had it earlier, I don't live with regret, but I can sit back and wonder. If I could make a change to my treatment, that would be it.

I'm still on three weekly doses of herceptin and perjeta and will be for the rest of my life. The beauty of those drugs together is that it can keep the cancer contained. I have a few possible spots on my lung which we're watching but nothing big enough to worry about. 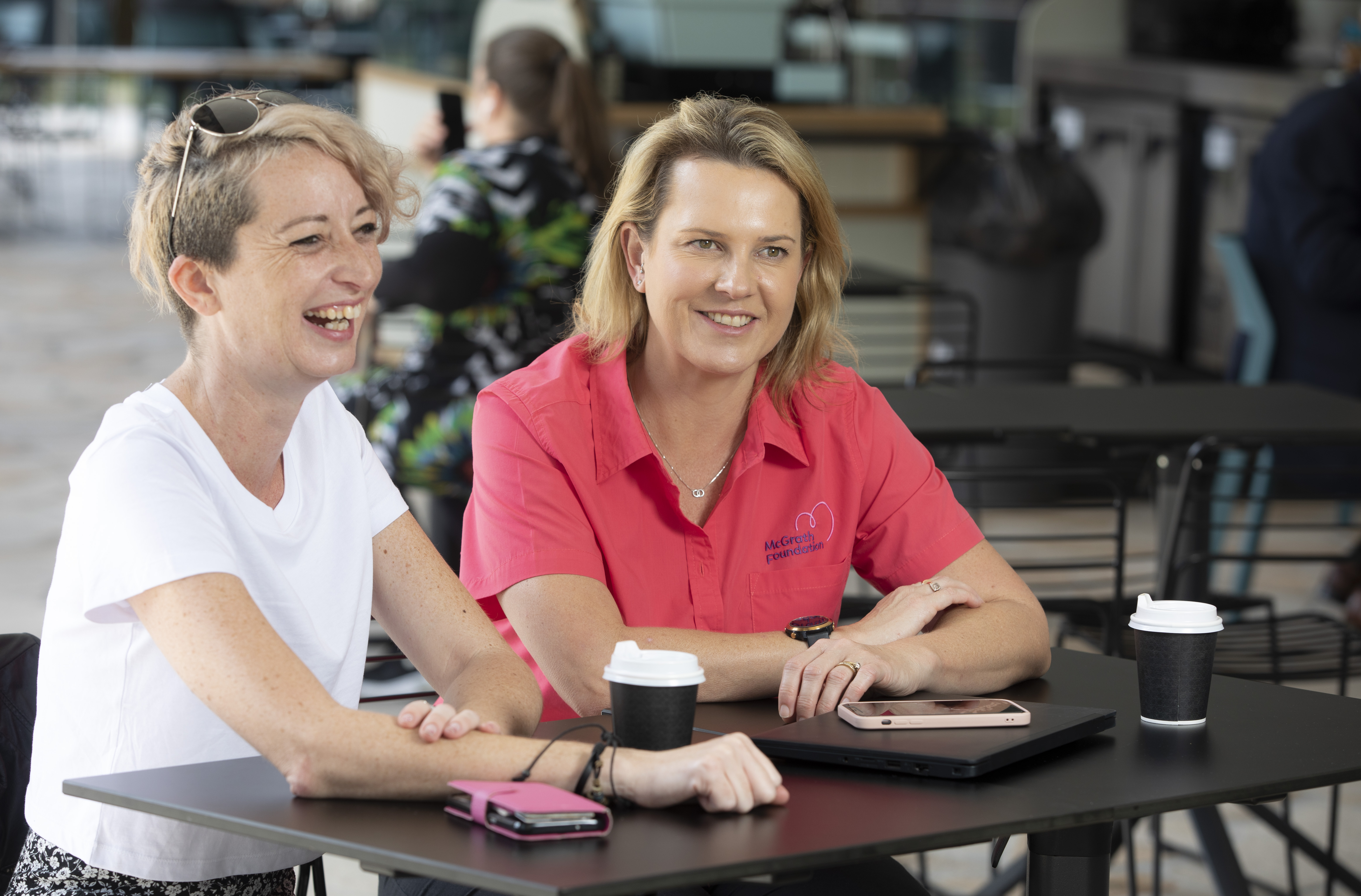 I do have to sleep regularly because of the medication, I have alot of bowel issues which are getting looked at soon and just general aches. I'm also on 4 weekly xgeva to help strengthen the bones and zolodex to switch off my ovaries, which has then sent me into early menopause symptoms, I get night sweats and wake four or five times a night in a pile of sweat. I had nerve blockers in my neck to stop the sweats, it worked for five days and then went back to normal and I even put cooling dog mats on my sheets, they were great at first but then it just holds the heat.

I was an aged care nurse and had to stop working late 2017. I was expecting to go back to work after cancer and did three months during my first round of chemo, but it got too difficult and I officially gave it up not long after the stage four diagnosis. It was really hard, I loved my job and was attached to the residents, so I started visiting the nursing home every month or so up until COVID-19.

I was living down the south coast with mum during the last two and a half years and still getting treated in Sydney, but I moved back into my own place recently. I was scared, but I don't want to live in a bubble, I know what I should and shouldn't be doing. I'm too afraid of living my last healthy life stuck inside so I still go out, see friends and have coffee in the park. I'm doing everything properly but not completely isolating myself like other people in my situation.

At the beginning of COVID-19 it was really hard, I was starting to get the spots on the lungs and also lost two friends with breast cancer. It was a slap in the face; they passed, I had the new spots and COVID-19 was happening so I couldn't do my regular coping mechanisms.

I'm a social person, I like physically seeing people and don't do phones really well, so I struggled quite a lot and hit a big low. Mum was there for me and every three weeks I would see Sam, my McGrath Breast Care Nurse, during treatment and have a chat. She is really good for me and has helped me open up. 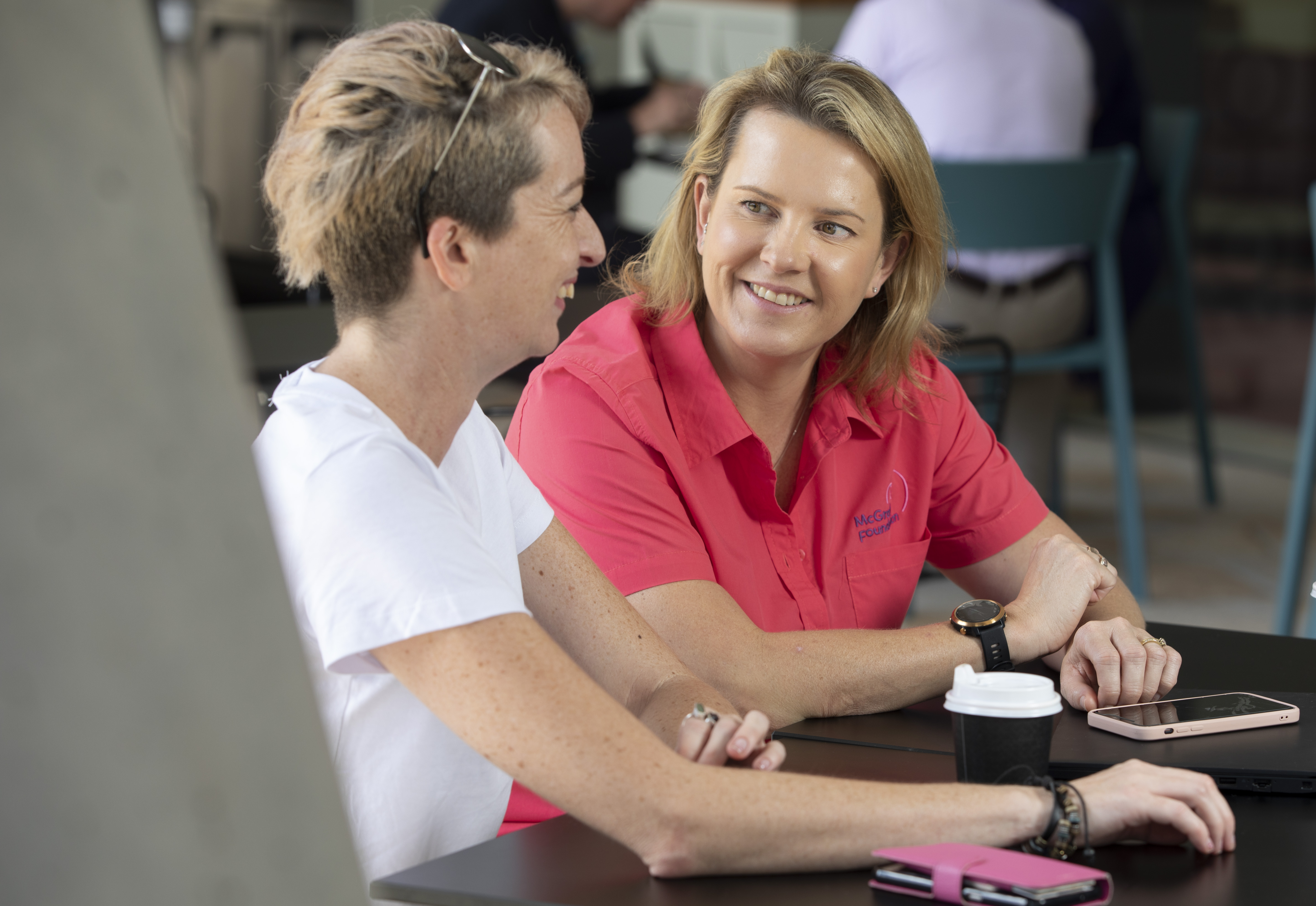 I have really learnt to find the silver linings in things. I suffered from depression my whole life and a lot of friends have told me cancer has healed me in alot of ways. I smile more, I've dropped the toxic negativity and I'm not afraid of everyone anymore. I've always been that person in the background who was scared of everything and never really put myself into life.

I have pink hair now. I got a bit funkier with the cut the other day, it's a bit of a mohawk. Before cancer, I had long boring brown hair in a ponytail. When I was bald, I tried to hide it but along the way I got comfortable with it and went out bald, it was a way of saying, 'This is what I'm going through and I don't have to hide who I am.' Sometimes I went out in my favourite pink wig, which is why I dyed it pink now. I used to hate pink.

I had this glimpse of myself years ago, I was on a holiday to Europe and even though I was scared of heights and falling, I went skydiving. I know I've always had that person in me, I've just never let myself be her, but I've lost that fear. I'm still scared and still have super anxieties about everything, but I do it anyway. I asked that cute boy out that I liked, we went out and had a drink and it didn't work out, but whatever. I'm just braver now.

I'm embracing life while I'm still here, that whole don't wait until you're dying to start living thing. I feel like I wasted so much of my time. I was able to get my superannuation out, I got the car I wanted, I'm living in the area I wanted to live and doing the things I wanted to do because I'm healthy and I can. 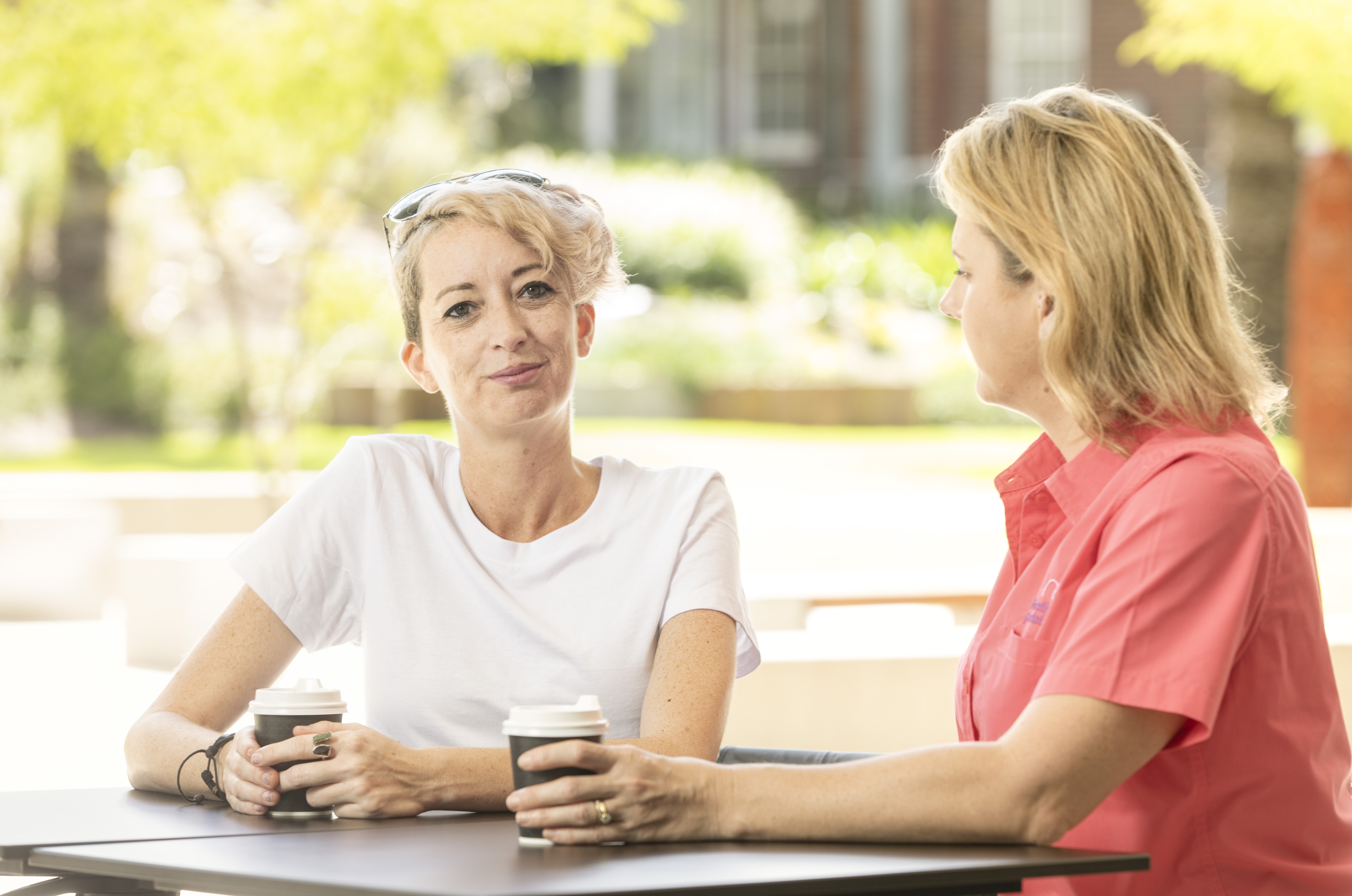 I met Sam not long before I got the stage 4 diagnosis, she pulled out my drain after the double mastectomy. Once I was diagnosed as metastatic, she became my McGrath Breast Care Nurse and that constant support has been so amazing.(By the time patients are diagnosed as metastatic, they can have seen up to 80 medical professionals, so that one point of contact becomes very important for ongoing treatment.)

I've always struggled asking for help and I had a moment with Sam, I told her 'This is really hard, I don't want to do treatment and want to give up'. Sam got me the help I needed and put me in touch with the mental health team. She was the only person I could really talk to. Sam is a similar age to me, so we can relate, we can have a laugh and I can gossip to her about something else going that's going on but obviously she's also the person that I can call and say, 'I'm not going good.'

I've done pretty much all cancer treatment on my own because mum was working and down the south coast. Sam helped me with me every appointment that I had, from the oncologist to the surgeon. She has really helped me understand my treatment options and translate the medical jargon. She'd make appointments for me and during them she'd mention something I was worried about, but forgot at the time. Honestly, she has helped my journey so much, it would have been really difficult without her.